The thing in the quotes is a constant. It will never change. The quotes let VBA know where the string constant starts and ends. This…

… wouldn't work. No quotes. VBA might think that Who is a variable. Then it gets let, and doesn't know what to do. So the program crashes.

The simplest string constant is:

That's two double quotes, with nothing between them. Not even a space. This is called an empty string.

Here's some code you saw before:

MsgBox "Sorry, amount must be a number."

Numeric operators are things like +, -, *, etc. There's only one string operator: &. It sticks strings together. For example: 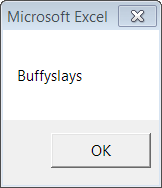 Oops. We need a space in there. New code: 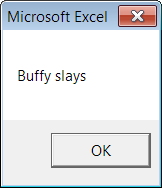 The geek name for & is the "concatenation operator."

You can use & with numbers and strings, but the result is always a string. For example:

number and Sqr(number) are both numeric expressions. Put 25 in cell B1, and here's what you'll see: 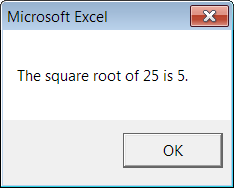 Remember that a function is some code with a name. You send it data, and it returns a result. Here are some string functions built into VBA:

For Mid(), the third parameter is optional. Without it, the function returns all the text to the end of the string. For example,…

Business software does a lot of string processing.

Say you had a database that stored people's names with last name first, like this:

You want a program that sends email to people. You wouldn't want the email greeting to be:

You'd want it to be:

Let's write a program to change the names around. The worksheet would start like this:

How to think about this?

If we knew where the comma was, then we could grab the text to the left. That would be the last name.

The comma is at character 10. The last name is characters 1 to 9.

This works for any last name.

The function InStr() will find the position of a character in a string.

The function Left() returns a number of characters from the left of a string.

We can use that to find the last name:

Notice commaPos - 1. That's what gives us the characters to the left of the comma. This…

… wouldn't work. It would include the comma in the last name. If you don't see why, try it in a VBA program.

What about the first name? That's to the right of the comma:

The Mid() function returns part of a string from a certain character position onward.

We could do this:

Why + 2? So we skip the space after the comma. That would work.

In practice, it would be easy for people to forget to type the space after the comma. The + 2 would lose the first character of the first name. Don't call Cameron ameron. She'll sarcasm you into a trembling ball of shame.

The Trim() function comes in handy here. It strips spaces off the start and end of a string. Here's the final code for the program that makes this work:

This works by finding the position of a character (a comma) in a string, then doing arithmetic to break up the string into pieces. This kind of programming is common in business.

What is the value of result at the end of the program?

Work it out on paper first, before you try it in Excel.

Your answer:
You got it!
Try putting the program into Excel. Change cc to one of the other codes, and see if the program still works.
Sorry, that's not it.
Something bad happened. Please take a screen shot and send it to someone.
Exercise: Parse scientific names
The scientific name of a species has two components: genus, and species. For example, the blue whale is balaenoptera musculus.

Write a program to parse a scientific name, and break it into separate components. For example, start with this:

Run, and get this:

A string can have letters (ABC… abc…), digits (0123456789), and special characters. "Pintrest" is a string constant. The simplest string constant is "", the empty string.

The concatenation operator, &, sticks strings together.

There are many string functions. They change case, strip spaces, find one string inside another, return parts of a string, etc.